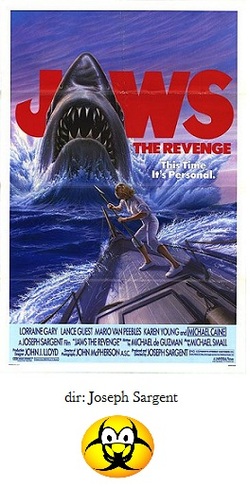 Picking on sequels is sometimes too easy and expected.  The vast majority of  sequels are, at best, disappointments, but once in a while you stumble on something pretty originally awful, offensive or insulting (a good example would be the notorious The Exorcist II: The Heretic).  Jaws- The Revenge, the 4th and worst in the series, is just such a movie.

If your movie attempts to rip-off the ridiculous 'plot' of Orca, then you deserve as much derision as is possible.  The 'star' here is Lorraine Gary, reprising her 'essential' role of Ellen Brody, the now widowed wife of Sheriff Brody (Roy Scheider from Jaws and Jaws 2).  After one of her sons is killed by a shark, she begins to suspect that this shark has an agenda and is hell-bent on devouring all of the remaining Brody family members in revenge.  Revenge?  Well, yes.  The fact that all of the sharks from the first three films were all very, very dead by the finales, it's very unclear how this particular shark has this particular vendetta on this particular family.  Do the sharks pass down grudges to their offspring?  Or maybe they have little, underwater conferences with each other to spread the message that all Brodys must die?!

The stupid story isn't helped by Gary's bland performance or Michael Caine's  scenery chewing.  Of course, this movie was made during the part in Caine's career when he basically accepted any role in any movie no matter how dire.

Another problem is the shark itself; it looks mottled and artificial, but director Joseph Sargent (who was condemned to TV Movie Purgatory after this movie did a massive belly-flop) wouldn't know what to do with it even if the shark were state of the art.

Jaws- The Revenge is one of those rare movies that actually causes physical pain for the viewer.  Every scene includes something to make one wince or roll the eyes in disbelief.  I'm not sure, but it's quite possible that there isn't a movie out there that has less of a reason for existing than this one.