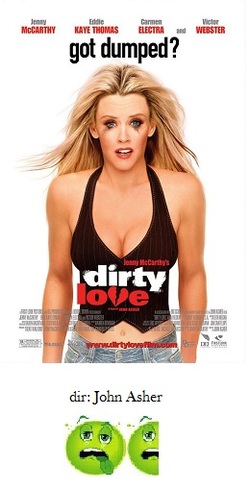 It's movies like Dirty Love that cause me to develop a temporary case of multiple-personality disorder.  On the one hand, I know in my heart that Dirty Love is juvenile, crude, amateurish and sloppy, a movie to sneer at and dismiss, and yet, I have to admit, I laughed.

Dirty Love stars the always fearless Jenny McCarthy as a miserable woman who just got dumped by her braindead, bohunk of a boyfriend and she spends the entire movie dating a series of weirdos, trying to find true love (as predicted by Kathy Griffin playing a fortune-teller).  Also on hand to witness her misadventures are her pals, squeaky Kam Heskin and, sporting a bad hairdo and an even worse ghetto accent, Carmen Electra.  Eddie Kaye Thomas costars as a male friend who is secretly in love with McCarthy.  You don't have to have seen very many movies to know how all of this will turn out.

Now, McCarthy will never be mistaken for a great actress or comedienne, but she is always willing to put herself out there and look foolish, anything to try and get a laugh.  The jokes in Dirty Love are of the very low-rent variety, often bordering on the disgusting, but McCarthy makes several of them work, anyway.  Who else could generate laughs while having her period while desperately trying to buy tampons at the grocery store?  (There ends up being a virtual lake of menstrual blood in the middle of the aisle).  She also has a memorable date with a man who likes to jam a fish in his ass as a sexual fetish ("Touch my bass!") and another with a bizarre magician.

Probably Dirty Love's biggest detriment is the fact that it looks, sounds and feels so cheap.  It was directed by McCathy's now ex-husband, actor John Asher, and based on the evidence here, he should stick with taking jobs in front of the camera.  The photography is drab, the sound and music are tinny and the sets prove that less is definitely not more.  Another big problem is the truly wretched performance by Carmen Electra; I'm sure her take on an African-American wannabe was meant to be an exaggeration, but it comes off more as a fairly offensive caricature.

There's not a lot else to say about Dirty Love.  Either you know whether it will be your cup of tea or not.  Personally, this sort of gross-out comedy isn't my thing but McCarthy's daffy, physical performance ended up winning me over.  She definitely has the skills to be involved in more polished projects than this one, but because of all of the menstrual blood, smelly fish, giant maxi-pads, rabbit-loving magicians, poo jokes, extacy trips and debasement, she will probably never get the chance.