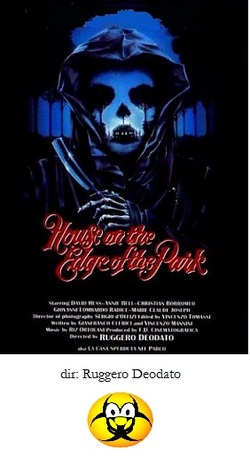 Don't be misled by the ultra-spooky video box cover and the terrifying- sounding synopsis on the back, because "House on the Edge of the Park" is a super-dull attempt to capitalize on the international success of Wes Craven's 1972 groundbreaker Last House on the Left; however, it fails spectacularly.

Director Ruggero Deodato, fresh from his penultimate cinematic ''achievement" Cannibal Holocaust, obviously wanted to have a success like Last House on the Left, so he went and hired David Hess, who played the major murderous thug in that film, to play...well...the major murderous thug for his film. No typecasting there or anything. Deodato then went on to swipe nearly the same plot and hoped that the similarities of story and star would also equal success. The only thing he forgot was that he had no directing talent and his cast of mainly Italian amateurs couldn't act their way out of a wet paper bag. Compound that with sluggish pacing, laughable dialogue, bad dubbing, and a "surprise" ending that makes less sense the more you think about it.

The film opens with Hess driving on a quiet road where he spots a woman in another car, so decides to run her off the road. Then he breaks in her car, throws her in the back seat and rapes and strangles her. Then we get the credits and the horrible theme song, "Sweetly".

Some time has passed and Hess, working as a mechanic, is dressed to go "boogying" and we are introduced to his weasly friend Ricky. Before they go out, a car pulls up and a young couple (I'll call them Yuppieman and Short Hair, since names are irrelevent) need car service. Anyway, Hess and Ricky fix the car, and as a 'thank you' the couple invite them to a party at their house out in the country. They agree.  After they arrive at the house (could it be THE "House on the Edge of the Park"???), we meet the other party guests, along with Yuppieman and Short Hair, there is Frizzy Hair, Monkeyman (yes the man looks very simian) and Baldy (a gorgeous, bald, black woman).

Basically the movie is one endless series of beatings, rapes and assaults, which sounds like it would at least be fast-paced, but it isn't. It is slooooow going indeed. After playing poker, Hess whips out his straight-razor and threatens the party guests, slicing Yuppieman's face and beating Monkeyman senseless, eventually tying him up underneath a coffeetable.  He rapes Short Hair, Ricky attempts to rape Frizzy Hair. Yuppieman has his face bashed into the poker table, Baldy is smacked around and always seems to have her top ripped off at regular intervals. There is lots of nonsensical yelling, and although Hess isn't much of an actor, at least he changes facial expressions, all five of the actors playing the party guests never waver from a deadened blank look in their eyes. Even Monkeyman, when he gets his face beaten, hardly makes any noticeable appearance of pain.

This nonsense goes on for the next 70 minutes or so. And, yes, it's as boring as you could have guessed. Later, a blonde girl arrives at the house to party, and she is immediately preyed upon by Hess, who strips her naked, and slices her body repeatedly with the razor while singing "Sweetly", the theme song. Ricky tries to stop him before he kills her and is stabbed in the stomach. Then, while Hess sobs and cradles Ricky's head in his lap, Yuppieman pulls a gun out of a drawer and shoots Hess in the leg.  After he's shot, he hobbles outside toward the swimming pool, and then Yuppieman tells him that the woman he raped at the beginning of the movie was his sister. You see, the whole party was a set-up to lure Hess into their house as part of a big revenge plot. It was all planned!! None of which makes any sense, since they should have just shot him as he walked in the door instead of waiting until he'd made mincemeat out of everyone. But then again, there wouldn't have been a movie otherwise.

Yuppieman then fires the gun again and blows a hole clean through Hess's crotch, which sends him tumbling down into the pool. Short hair and Monkeyman also take some more shots into him until he floats dead and motionless in the water. They spare the life of bleeding Ricky and proceed to call the cops. Revenge is sweet indeed.

This is one of the longest, slowest, most unendurable pieces of garbage I've seen, like, ever.  It felt like it was 4 hours long.

There has been a lot of debate over Last House on the Left and whether it is a work of genius or sickness. But one thing can't be denied, it is a powerful, visceral and altogether gut-wrenching film. House on the Edge of the Park has none of the those qualities. It's just a work of unadulterated, derivative, pretentious crap.