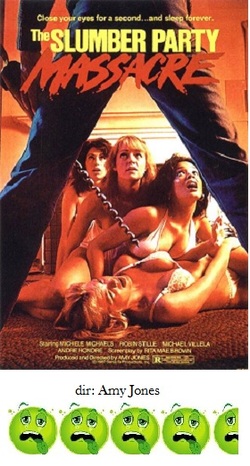 Even though The Slumber Party Massacre was written by one woman, noted feminist author Rita Mae Brown, and directed by another, Amy Jones, it was still just as trashy and inept as all of the bargain-basement, 1980s slasher movies made by their male counterparts.

The title itself, The Slumber Party Massacre, is all you need to know about the plot (or lack thereof).  A mad killer has escaped police custody and has now set his sights on a slumber party for his next bloodbath.  Before we get to the titular event, we are introduced to the 'characters', a group of high school girls and their boyfriends.  There is another girl whom this clique doesn't like, who also happens to live next door to where the party will occur.  And it doesn't take long before our madman has found himself a very long drill and begins culling the herd.

Yes, the obvious penis symbolism here is hard to miss, what with the countless shots of the killer, the long drill and the 'penetration' of many scantily clad, cowering females.  But that's pretty much all of the subtext involved in what is an undistinguished recycling of all the standard slasher film cliches.  Want to venture into the garage to make out with your boyfriend?  Dead.  Want to 'check out' those noises in the backyard?  Dead.  And so on, and so on.  There are also plenty of the obligatory topless scenes to get in the required boobage, along with nameless characters who show up only to be quick and bloody fodder for the drill.

All of the above would be fine and good if only The Slumber Party Massacre were scary, inventive, or well-directed, but it's none of these things.  There is one amusing moment when one of the gals gets hungry and  pries the pizza box from the dead hands of the just-murdered delivery guy, but the whole movie just needed more: more satire, more humor, more over the top acting or gore.

Despite the writing and directing credentials, The Slumber Party Massacre is a run-of-the-mill slasher film that is just as bad as some, and much worse than many others.