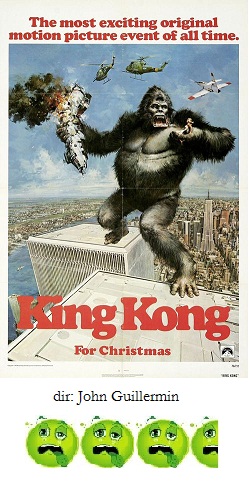 In the category of needless remakes, the 1976 version of King Kong stands head and shoulders above the competition (even though Peter Jackson later proved you can create a good King Kong remake).  Everything about this movie is just one big mistake, from the acting and the laughable screenplay, to the slipshod direction and uber-crappy special effects.

The only point of interest in King Kong, is that it featured the film debut (and very nearly, the film adieu) of a young, blonde, starlet by the name of Jessica Lange. This role, and her god-awful performance in it, is the sort that kills careers before they even start. After this debacle, she wisely took several years off to study acting abroad, and came back with All That Jazz, The Postman Always Rings Twice and the one-two punch of Tootsie and Frances which garnered her two Oscar nominations in 1982. Talk about a comeback!

The story should be familiar. A group of Americans discover an island native society who worship a giant ape. The Americans capture said ape and bring him back, only to have him run amok. In this case the Americans are oil drillers (led by Charles Grodin and an indescribably shaggy looking Jeff Bridges). Before the reach the island they find a raft adrift in the sea containing Jessica Lange.

In the first of many laughable passages of dialogue, Lange explains who she is and where she came from: "My name's Dwan. You know like Dawn only with the 'a' and the 'w' switched?" and then says that the yacht she was on exploded and killed everyone else on board because they were down below watching Deep Throat: "Do you know anyone else whose life was saved by Deep Throat?" Try to contain your laughter each and every time someone calls out "Dwan!", it's nearly impossible.

Anyway, they reach the island, and see the natives (even though the screenplay states that they are in the south pacific, which would mean the indigenous people would be of polynesian decent, the natives here are African-American). Lange is captured by the natives and is sent to be sacrificed to the giant ape.

And now onto the special effects. King Kong is played mostly by an unconvincing man in an ape suit. The blue screen effects of the ape suit amongst fake trees superimposed in front of a cowering Lange, is too ridiculous to believe until you actually see it. Once he captures her; however, it gets even worse, what with the sloppy editing between Lange sitting in a fake ape hand, the blue screening, and shots of the ape suit-guy carrying around what looks like a barbie-doll. And I haven't even mentioned the fight to the death between King Kong and a giant snake! This painful scene has the ape-suit guy wrestling a giant, completely fake-looking, foam rubber snake.  It's like something out of an Ed Wood movie, only not as entertaining. There is also more horrendous dialogue, as Lange punches angrily at the ape's foam rubber snout screaming "You goddamn chauvinist-pig ape! Choke on me!", and then trying to soothe the angry beast with "I'm a Libra. What sign are you?"

The ape is captured and brought to the USA, whereapon he promptly escapes. Here is another example of the "wizardry" behind the effects. Kong, this time edited between ape suit-guy and a large paper-mache replica, breaks his chains and runs rampant through a crowd of people. As he steps on them, instead of the expected splat that would occur if such a thing were to happen, we have an ape-foot stomping onto the blue-screened crowd, whereupon the people fall to the ground and kind of shake and spasm a lot to indicate they've been stepped on. Groding is stepped on too, but we cut away before it actually happens. We have to assume it.

The only twist this time is Kong does not climb the Empire State building, but instead climbs the World Trade Center and leaps between the towers (which would be the ONLY reason to watch this mess). Of course, the military sends in helicopters to attack the ape and shoot him down, and we are treated to the ape suit-guy covered in little blood spots from the bullets, screaming in agony, swatting the toy helicopters while Lange screams over the impending death of her new ape-lover. Kong dies and plummets to the crowd below, and the wretched editing takes over. The shots switch from the crowd below to the tower a full second before the special effects kick in of Kong actually falling, so that we see him appear out of thin air before continuing his decent. Kong dies. Lange cries. The End.

This whole production is a just a complete fiasco, but what else could be expect from producer Dino DeLaurentiis, who must pride himself on turning unfilmmable material into unwatchable films (Mandingo, Hurricane, Flash Gordon, Orca, Dune, Body of Evidence etc. etc. etc.). It would be years before another cinematic stab at the Kong legend would occur.