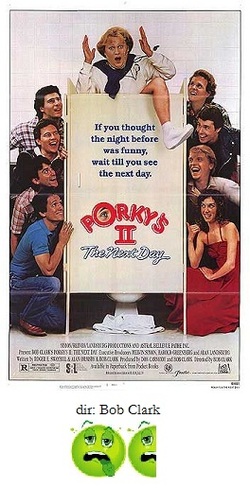 Having been no huge fan of the original Porky's, I'm trying to figure out why I find the sequel, Porky's II: The Next Day, to actually be pretty funny, and I think it has to do with Porky's itself.

Ok, let me try to clarify. In the original, there was a notorious bar called Porky's, where our heroes (Pee-Wee, Meat and the rest of the gang) were thwarted by the evil redneck bubbas who ran the place. Also, in the 3rd film, Porky's Revenge, Porky and the other bubbas returned to cause trouble once again. But, if you look at Porky's II you will find no evidence of Porky nor his bar. Does this make the difference? Maybe so.

Porky's II: The Next Day begins, yes, the next day, after Porky's bar was destroyed by the gang, and Pee-Wee lost his virginity to Wendy. Of course, crude sex jokes and tastelessness once again ensue. Oddly, though, instead of the general mean-spiritedness of the original, the sequel is somewhat sweeter, and at times, kind of touching.

The basic premise involves the kids trying to perform the works of Shakespeare as part of drama club; however, a local blowhard preacher, the Reverend Bubba Flavel, wants it shut down and declared obscene. In one of the film's highlights, the Reverend takes his grievances to the school principal and the two have a verbal argument using Shakespeare's text and Bible verses to prove each other's point.  Along with this plot, the boys again do everything they can to have sex. At one point they hire a stripper to pose as a librarian who gets turned on by graveyards, only to have the joke backfire amusingly. There are also the usual jokes involving the evil lesbian gym teacher known as Mrs. Ballbreaker.

I'm not saying any of this is classic material, mind you. But some of the things that didn't work in the original, acutally work this time. We are once again subjected to a racism subplot like in the original, but this time the screenwriters actually follow through with it to a conclusion. In the first film, the character of Wendy was barely given anything to do but stand around and become the object of the boys' lust, this time her character is given 3 dimensions. She gets a very tender scene with Pee-Wee talking about her sleazy reputation, and a scene in the finale where she is allowed to let her comedic talents really run wild.

There's nothing really spectacular or original about Porky's II.  It's not especially inventive, nor is it something that is going to be remembered for comic greatness. However, it is an amusing and entertaining way to spend 90 minutes.

Considering the sloppiness of the original Porky's and the outright wretchedness of Porky's Revenge, the fact that Porky's II actually works, at times, is almost a miracle.