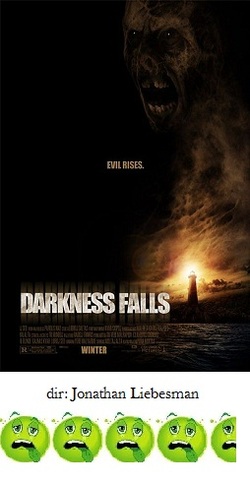 In order for a supernatural horror movie to work, there need to be firmly established rules regarding the mythology behind the monster, creature, spirit or whatever might be the horror plot's source.  Darkness Falls laboriously puts those rules into place and then completely disregards them until nothing makes any sense.

Darkness Falls starts off quite well.  A voice-over tells us of the chequered history of the town of Darkness Falls.  You see, a century ago, an old woman was sort of a human version of the tooth fairy where the children of the town would bring her their teeth.  After an accident leaves her disfigured, several children vanish mysteriously and the woman is blamed and lynched.  Now, whenever a child loses his/her last baby tooth, the Tooth Fairy makes her appearance.  We are told that as long as you stay in the light and don't look at her face, you'll be fine, otherwise she'll hunt you down and kill you.

The opening sequence involving a boy whose mother is killed by the Tooth Fairy is well-directed, atmospheric and tense.  This will be the last moment of enjoyment for the rest of the movie.  We jump to 12 years later, and the boy, now grown and played by Chaney Kley is called by his childhood friend, Emma Caulfield, for help.  Caulfield's little brother is suffering from night terrors and won't sleep.  Now, of course, since Kley has returned, the Tooth Fairy seeks him out as well.

There are just so many problems and unanswered questions about the plot that it really boggles the mind.  But here are a few:  If the Tooth Fairy tries to kill all the children who lose their last tooth, wouldn't scores of kiddies be wiped out until there really isn't anyone left alive in town?  Why does anyone live there?  Kley states that he hasn't slept in the dark for 12 years even though he left town, so does the Tooth Fairy commute?  If the Tooth Fairy only kills those that see her face, why do people left and right who never see her get killed, too?  How much light is enough light to thwart her?  Sometimes flashlights do the trick, sometimes they don't.  Is moonlight enough light?  Dusk?  Dawn?  So many scenes have varying light sources (enough for us to see what's happening at least) that it is frustratingly inconsistent as to what works and what doesn't?  The Tooth Fairy seems to appear and disappear at random anywhere, so even if someone shines a light at it, shouldn't she be able to just vanish whenever she wants to?  Is she a physical being?  A ghost?  A demon?  Sometimes throwing things at her causes injury, sometimes not.  She seems to be a very large entity, yet when Caulfield's little brother is getting ready to be put into a small, confining sensory deprivation chamber, we hear the Tooth Fairy making her appearance, but we wonder how in the world she'll fit inside it.  And there are many, many more questions, still.

You see what I'm getting at?  Basically, anything can happen to anyone, anywhere and for any reason.  Random things happen to random people over and over again until the whole mess shambles towards its boring conclusion where the Tooth Fairy is vanquished inside a lighthouse by being set on fire.  How?  Who knows?  It just is.

I'm all for the willing suspension of disbelief when it comes to watching movies, but Darkness Falls just requires so much of it that it causes a migraine. As one of the characters so eloquently puts it, "All this over a f*cking tooth?"