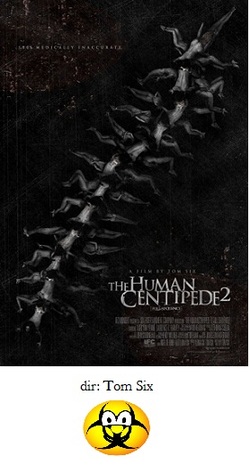 Like the old saying goes: "Be careful what you wish for, you just might get it."  My main complaint with The Human Centipede: First Sequence was that it was all concept, that it presented something so outrageous but didn't do anything with it.  The Human Centipede 2: Full Sequence, however, takes the concept (people being surgically attached anus to mouth in one long digestive tract) and goes to the sickening, depressing limit.

Instead of being a straight-forward sequel, writer/director Tom Six has gone the meta route this time.  Our main character here is Martin (Laurence R. Harvey), a corpulent, greasy, bug-eyed parking garage attendant who never speaks and lives with his cruel mother.  Martin is absolutely obsessed with the movie The Human Centipede: First Sequence to such an extent that he plans on replicating the acts of mutilation within it.

The earlier passages of the movie involve Martin finding various innocent people, knocking them out, carting them off to a warehouse and then stripping and gagging them.  His goal is to make a 12-person centipede and the victims are comprised of both men and women of varying ages and ethnicities, including one woman who is 9 months pregnant.  The crowning achievement for Martin, though, is tricking Ashlynn Yennie (the actress who was the middle of the centipede in the first film just playing herself here) to be his centipede's head.

Once he's got all 12, he brings out a toolbox of dull, rusty knives, hammers, saws, chisels, etc. and tries to perform the complex surgeries he saw in the movie.  This does not go well.  We get lovely moments such as Martin forcing a man's mouth open and then chiseling out his teeth one by one, slicing up a man's buttocks in order to get the proper skin flaps, but botching it up so bad the man dies, and also slicing open several of the victims knees and yanking and cutting the tendons.  Martin becomes impatient so he pulls out a staple gun to attach everyone together.  Once this is finally accomplished Martin cannot wait for nature to take its course so he doses them all with laxatives and...well...you can only imagine what happens next.  But The Human Centipede 2: Full Sequence is not satisfied with the atrocities I've already described, so we have so many other images throughout like masturbation with sandpaper, rape with barbed wire, a squashed newborn, throat slashings, bludgeonings, shootings and a most painful 'burial' of an actual centipede up into a character's rectum.

The total copout ending, while answering a lot of the screenplay's laughable flaws in logic, is probably the worst thing about the movie.  It's Tom Six pulling his punches at the last possible second.  The only saving grace is that the movie is shot in black and white.  As difficult as it was to sit through, I can't even comprehend it if all of the above events were shown in full color.

I have to admit that The Human Centipede 2: Full Sequence is actually a better made film than its predecessor, and film students probably can learn something about developing a narrative with little to no actual dialogue.  But they'd have to ask themselves if actually watching this would be worth it.