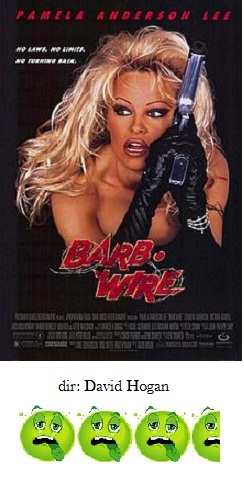 Barb Wire was Pamela Anderson's bid for big screen stardom, but it bombed in a huge way and sent her career down to doing only bit parts here and there, coasting on her sex-tape notoriety with her then husband, Tommy Lee.

We start off with the helpful information that Barb Wire takes place in the year 2017 where the United States has devolved into a police state after a second civil war.  The city of Steel Harbor remains the only free outpost which, of course, attracts all sorts of criminals and resistance fighters. This is all good to know, because with the exception of the common use of retinal identification scanners, the movie may as well be taking place in Anytime.  Anderson (Barb Wire is her character's name) runs a bar and is a freelance mercenary.

As far as a plot goes, there really isn't much of one.  Or should I say, the plot here is, believe it or not, a distaff, futuristic updating of Casablanca.  We have a movie that takes place almost entirely in a bar/club, and there are resistance fighters, a romance from the past, and a group of 'government officials', led by main baddie Steve Railsback, who all dress like SS officers.  There is also a pair of specialty contact lenses which nullify the retinal scanners, of which everyone is trying to possess.

All of this, I guess, could've amounted to a truly great bad movie, but as it is, Barb Wire is pretty dull.  The only suspense or tension generated within it is trying to guess how the engineering of Anderson's barely-there leather boustiers can possibly contain her gigantic hooters.  Seriously, you almost want to duck for fear of losing an eye if one of the buttons popped off her black vinyl corset.  Needless to say, all that Anderson can offer this movie is her cleavage, because it certainly isn't her acting ability.  Despite all of the gun-battles, motorcycle chases (which includes one of the many laughably obvious Pamela Anderson stunt doubles) and other such nonsense, Anderson is barely able to come up with more than one facial expression, and her barely audible and completely flat line readings don't help, either.

Barb Wire was a deserved flop, and lucky for us Anderson hasn't been asked to participate in a sequel.  It's only for those who just can't get enough of her boobies, for everyone else, it's best just to stay far, far away.