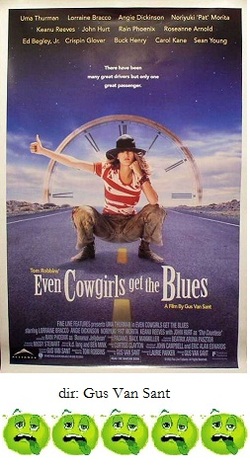 Let me say first-off that I believe Gus Van Sant is a great director. The man has produced some truly amazing films including Drugstore Cowboy, Milk, Good Will Hunting, To Die For and Elephant. His adaptation of Tom Robbins's Even Cowgirls Get the Blues is not one of them. Like the great Robert Altman, when he's good he's among the best in the world, but when he misfires, he creates one truly horrible mess.

Yet, I can't really blame Van Sant. Why, you ask? This film originally was scheduled for release in late 1993, but after a disastrous premier, Fine Line Studios ordered extensive recuts and reshoots.  Then the release date get getting bumped back week after week after week.  By the actual release in 1994 it is quite obvious that there was a nugget of something good, but after whatever patch-up job Van Sant was required to do, the result is truly head-scratching. Who knows what the film's original cut was like?  It couldn't possibly have been worse than this, could it?

Uma Thurman stars as Sissy Hankshaw, a feminine-hygiene model and self-proclaimed "professional hitchhiker" with giant thumbs. The plot (and I use the term ever so loosely), has to do with her visit to the Rubber Rose Ranch, a health resort for women, and her induction into the rebellious cowgirls who work there. The cowgirl leader, named Bonanza Jellybean, is played (poorly I might add), by Rain Phoenix. Sissy and Bonanza become lovers, and with the cowgirls' help, they take over the ranch and try to save a flock of cranes.

Their are two huge problems that this film just can't recover from. The first is the completely outdated material, written in the 70's, that contains endless speeches dealing with feminism, cowgirl philosophy, and "feminine odor" that just induces laughter instead of insightful "ooh, cool" responses. Secondly, the editing is truly godawful. Scenes seem to begin and end at random without a thread of cohesion, characters come and go in rapid succession without any explanation, until you are left wondering who did what to who and why.  To be able to succeed with this material, the film really needed to be a lot longer. But at a scant 90 odd minutes, there is just too much going on.

The best way to truly enjoy this clunker would be to consume massive quantities of hallucinogens. It really couldn't hurt.