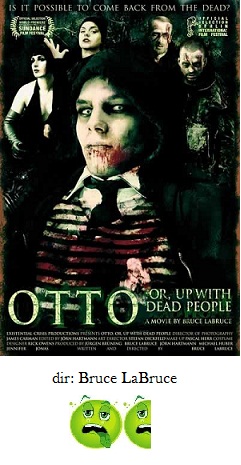 For those who were yearning for a pretentious, meta-mindbending, gay zombie film, Otto; or, Up With Dead People is here to fulfill that desire.  For everyone else, you may want to watch something else.

I'll try to do my best and describe the story behind Otto, but I have a feeling this will be easier said than done.  We are told, via voiceover narration from Katharnia Klewinghaus that lets us know that zombies have become a common occurrence and that they "unlive" amongst the normal populace.  Jey Crisfar, playing Otto, rises out of the graveyard and begins a journey of sorts that includes being cast in a movie, called Up With Dead People, that is being directed by Klewinghaus.

That's about all I can come up with.  You see, this movie does this back and forth editing through the reality of Otto's existence combined with scenes from Up With Dead People as well as some background of Klewinghaus as she is coming up with the idea for the movie.  Got that?  We are also told about how homosexual zombies are now fast becoming the norm, and that they suffer with another level of discrimination and prejudice.  This symbolism is just so...subtle, you know?

The plot is just too silly to be taken seriously.  That doesn't mean there isn't something of interest or value here.  The playing around with the timeline and the blurring of reality, while confusing, at least keeps the viewer interested in just how all of this will play out.  The acting by Crisfar, while minimal, is quite effective, although Klewinghaus could've used some acting lessons.  One of my favorite parts of Otto involves Klewinghaus's girlfriend, Susanne Sache, who only appears as if in a silent black and white movie, complete with piano score, scratchy, film and title cards, even in scenes with other characters.  It's inventive, well-done and funny.  Otherwise, the sound design is incessant and, at times, very distracting, full of crunching music, squeals and static.

The gore quotient is pretty high, though, as we watch Crisfar munching on roadkill, and in one scene, he is picked up outside a bar by young man (the bar is holding a 'Zombie Night'), taken to his apartment, and engage in graphic sex before the room is painted with blood and organs.  The opening scene in the Up With Dead People movie involves a recently zombie-fied man muching on the entrails of his lover before we get a yummy closeup of him explicitly having sex with his lover's belly wound.  The film ends, as it must, with a blood-soaked gay orgy.

Adventurous, cast-iron stomached, viewers will definitely find some interesting things within Otto; or, Up With Dead People to appreciate.  It's not your run of the mill movie, that's for sure.  It wasn't exactly good, or fun, or entertaining but it was never boring.