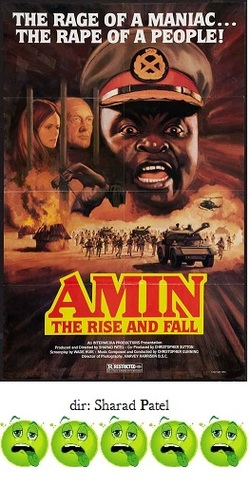 In the late 70s and early 80s there was a great rash of exploitation films that took real life historical tragedies and then turned them into stomach-churning, so-called 'events' that were less concerned with telling a riveting tale than to use the stories to show unending scenes of violence and depravity.  We got the Jonestown mass suicide in the hideous Guyana: Cult of the Damned, the South American, plane-crash survivors who resorted to cannibalism in Survive!, and Amin: The Rise and Fall, purported to give us an inside look at the brutal ruler of Uganda, Idi Amin.

Anyone who is genuinely curious about the true story of Idi Amin should look elsewhere, because Amin: The Rise and Fall isn't really interested in such things as coherent story-telling or historic detail.  The politics are basically skirted around without providing any insight.  The film begins with Amin's ascension as the leader of Uganda, but it's never explained how he wrested power or why.  As portrayed by Joseph Olita, who basically acts with the whites of his eyes, Amin is merely a corpulent, overgrown, insane child who understands nothing of economics, military tactics, or international relations.  He has no character arc; he begins by wantonly murdering citizens left and right, and that's pretty much all he does while stomping around and screaming at the top of his lungs.

The writing in Amin: The Rise and Fall is particularly weak.  Many, many people are gunned down, hacked, burned and buried, but it's never clear who they are.  There are a couple of historical events depicted, such as the raid on the airport in Entebbe to free a group of Israeli citizens, but if you weren't already familiar with this incident, you'd have no idea what the heck was going on.  Characters also seem to disappear and reappear at random without comment; a British journalist is imprisoned by Amin and won't be released until Queen Elizabeth, herself, shows up to plead for his release...but then ten minutes later we see the journalist shown free and alive back in the U.K.  What happened?  Why was he let go?  We never know.

But the real reason for the existence of this movie is for the bloodshed, nothing more.  It seems that Amin liked to keep the decapitated heads of his enemies in a freezer, and dabbled in cannibalism, as shown in a scene of Amin slicing off a strip of flesh from a dead body and chowing down on it.  He also has one of his many wives executed and then demands her arms and legs be sawed off right before her dead body is shown to his children.  Nice.  In between these atrocities are endless scenes of what feel like thousands of innocents being gunned down by firing squads.  The movie is so callous, that before anyone is shot, they are dressed in a strange, white apron, for no apparent reason other than the fact that blood just shows up better when filmed against white fabric.

Amin: The Rise and Fall is simply garbage...but then again, director Sharad Patel and the studios knew it.  If there was any doubt about their real intentions with this movie, one only needs to look at the other movie posters which proudly show Amin gnawing down on human body parts.  Did it really happen?  Even if it did, does anyone really need to see it?  Hardly.