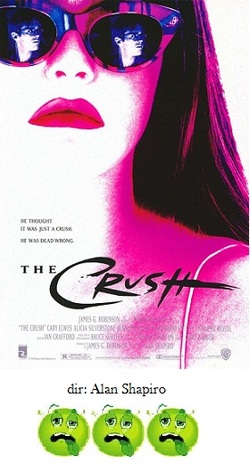 The Crush also deserves a place in history as the film where a large group of movie executives and casting agents saw the screen test of Alicia Silverstone and went "Wow, what a great actress!"

Dimbulb magazine writer, played by Cary Elwes, rents the guest house from a wealthy family and is immediately preyed upon by their teenage daughter (Silverstone). Elwes is so unaware that Silverstone has the hots for him, even though she sunbathes beneath his window, steals glances at his tush while he dresses (with the door open, natch), looks at him with "do me" goo-goo eyes, and bites her lip.

Every event in this movie goes according to formula, Elwes spurns Silverstone, so she must do away with any competition and ruin his life in the process. She hacks into his computer and erases his articles, builds a shrine to him in the basement, and even feigns her own rape in an attempt to win him back. Like that will work when he's put in jail. Not too bright for a chick who is a brilliant entomologist, equestrian, and piano prodigy. Jennifer Rubin is Elwes' main squeeze, but she's hospitalized by Silverstone who instigates a bee attack.

After Elwes has been pushed to the edge, he breaks into Silverstone's house to steal her diary. The grand finale takes place in the attic where a pre-Buffy the Vampire Slayer Amber Benson, as Silverstone's friend who is trying to help Elwes, is tied and gagged to a circus carousel (don't ask), and instead of knocking off Silverstone, Elwes punches her in the face, which sends her, literally flying across the room. No joke, he hits her, and she is miraculously lifted off her feet and sails across the attic. Afterwards, Silverstone is committed into an asylum, where it is apparent that she will continue her evil ways.

The performace by Silverstone is extremely funny. It's hard to describe how someone can heinously overact, and remain completely lethargic at the same time. She does outrages things, but does them flat. Whether it's wielding a mean pool cue, chopping the bejesus out of some lemons, or saying outrageous things like, "That's okay. Some men like small breasts", she shows not a whit of personality or energy. Cary Elwes doesn't fare much better either, but we came to expect that from him.

The Crush was a commercial failure that it signalled the eventual, though protracted, end of the "_____ from Hell" movie craze.