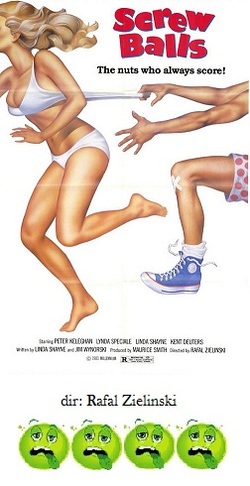 It's altogether too easy to pile on a movie like Screwballs, one of the myriad of brain-dead teen sex comedies released in the wake of the phenomenal success of Porky's in 1982.  After all, they aren't striving to be art. They just want to bring some laughs and show lots of boobs.  Screwballs only achieves the latter.

There really isn't any plot to speak of.  Basically, Screwballs is about a group of high school boys, who all fit into a stereotype (we have the stud, the rich guy, the fat guy, the nerd and the new kid) who meet in detention.  You see, all of them wound up there because of the evil, virgin, bitch student named Purity Busch.  So the whole movie revolves around the boys doing whatever they can to get a look at Purity's breasts.  We've all got a dream, I guess.

Another bit that doesn't pay off is the female character named Bootsie Goodhead who gets her skirt closed in the back doors of a van so that she is forced to continuously press her bare hooters against the glass.  I would feel sorry for Lynda Shane, the actress playing Bootsie, but since she co-wrote the screenplay, and is even listed in the credits as 'creative supervisor' (?), I can't feel too bad for her.

The film ends as expected with the boys finally stripping Purity of her clothes (while she's onstage in front of the whole school singing the National Anthem) and getting a gander at her chest.  What you probably don't expect is that the very next second after she's boobs to the wind, the credits flash on the screen and the movie just stops cold.  The end.

Screwballs is just a shoddy piece of filmmaking without an ounce of talent or artistry to be found anywhere.  The only good thing that can be said about the movie is the fact that it's all done in a suprisingly good spirit.  So many of these teen sex movies are kind of mean and misogynistic at their core, but Screwballs isn't.  At least that's something.