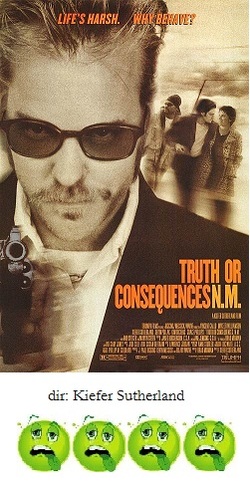 Actors, as a general rule, should not direct. For every successful attempt, like Dead Man Walking (Tim Robbins), there are scores of mistakes like Staying Alive (Sylvester Stallone) and the like. Truth or Consequences, N.M. is the directorial debut and, should' ve been adieu, of Kiefer Sutherland.

To Sutherland's credit, the real fiasco of this Tarantino wannabe is the wretched script by Brad Mirman. But since Sutherland must've thought it was cool, he deserves equal blame. He deserves even more blame for also starring in it, and giving the film its worst performance.

A career criminal, played byVincent Gallo, gets out of prison and hooks up with his gang of thieves, which include Sutherland, as an extremely over the top trigger man, and Mykelti Williams as the token boy in da'hood complete with a pair of panty-hose on his head and a vocabularly which consists of "gots", "dark-skinded" etc., but since he's actually an under-cover cop, this exaggerated stereotype should have thrown up red flags to the gang that something wasn't quite right. But that's assuming that the characters were smart, which they aren't. There's also Gallo's girlfriend, a wasted Kim Dickens, who basically functions as, well, the girlfriend.

Anyway, a drug deal goes awry that leaves several cops dead and our group of friends on the run. They kidnap a couple (Kevin Pollack and Grace Phillips) and go on an endless journey to escape the feds.

At this point, the script becomes more or less a series of scenes that can best be described as "inspired" by the works of Tarantino. But if you ask me, it's downright theft. During passages of so-called action, the characters sit around and have philosophical discussions about killing, argue the nutritional properties of hotdogs versus breakfast burritos, and even engage in a not-as-lively-as-they-think debate about Yogi Bear (these diversions are obviously lifted directly from Pulp Fiction).

Eventually the gang head to Vegas and get into a run-in with mob boss Rod Steiger. For the three minutes Steiger is on screen he manages to not only chew the scenery, but consume it whole. Thankfully Sutherland kills him. Later Martin Sheen shows up as a mafia hit man to track them down. Sheen arrives at the house of Max Perlich and tortures him. In a scene stolen from Reservoir Dogs, Perlich is tied up and Sheen begins amputating his fingers while Lesley Gore's "It's My Party" is playing in the background.

The finale is set in New Mexico, and stolen from True Romance, in which our friends are engaged in a free-for-all showdown against a group of drug dealers, the mob, and a S.W.A.T. team, which consists of all of these characters shooting each other and running around all higgildy-piggildy.  Everyone dies. The end.

This film needed a serious appointment with the nearest editing machine. If you excised all of the deep discussions around campfires which are obviously supposed to be passed off as "character development" you will at least be left with the action sequences. But since these are so haphazardly staged by Sutherland, and poorly performed by all parties involved, what are we left with?