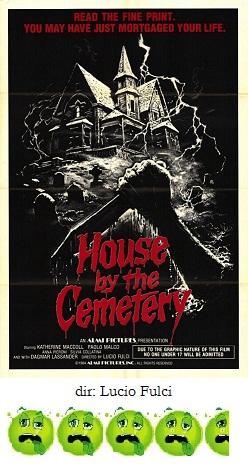 Also known as Quella villa accanto al cimitero as if anyone really cared. You have to hand it to the Italian horror directors of the day, they are definitely a group that values style WAY over anything relating to coherence. The true masters of the Italian 'giallo' cinema were  Dario Argento and Mario Bava, even when their films were less than perfect they had such a command of horror techniques and used them to create some truly memorable experiences. Then there are those like Lucio Fulci, mere hacks who mask their lack of talent with gallons of gore and impenetrable plotlines.

Fulci gained notoriety with the zombie one-two punch of Zombie and City of the Living Dead (aka Gates of Hell); two nauseating and nasty little pieces of work. The former remembered by a woman's eyeball being slowly punctured on a piece of wood, the latter for the scene where a woman literally vomits up every one of her internal organs. Not pretty. But even if flicks like these are your thing, Fulci failed to even bother telling a story that made sense, compounded with some of the worst acting, dubbing, cinematography and writing imaginable. George Romero made zombie movies too, but at least he made them smart (well, most of them).

Without further ado, I bring to you House by the Cemetery, another Fulci puke opus. To its credit, its not as vile as Zombie, City of the Living Dead, or his true low point, The New York Ripper, but to its detriment, it makes even less sense than those two combined.

Where to begin. We start with a young couple and their son (who is named "Bob", which illicited giggles from me everytime someone called his name, don't know why). They leave New York City to take up residence in a gothic house out in the rural part of the state (yes, you will notice that although the film is set in America the cast is Italian and speak in horribly dubbed English).  Anyway, once there, strange things begin to happen..sort of. Again, it's hard to tell what's going on most of the time. The wife is attacked by a rubber bat, they find a sealed grave in the middle of the living room floor and hear strange noises in the basement. All signs point to the fact that they should all get the hell out of dodge, but of course, they stick around.

Where does this all lead to you ask? Again, I'm not entirely clear. Apparantly, an evil doctor once lived in the house who had made a pact with the devil, or something, and he has decided to rise and kill again...or something. A couple of extraneous characters get massacred along the way, and in true Lucio Fulci style, it's done as artlessly and nastily as possible; such as when a real estate estate lady gets  her neck gouged by a fireplace poker and we get nice, slow-motion shot of the arterial spray from her neck spurting up to the camera.

Fulci couldn't film a lucid plot if his life depended on it. He throws together anything he can think of and simply waits to see if any of it will gel together. It doesn't. Along with the undead doctor, we have a mysterious ghost girl who befriends Bob, a woman who shows up out of nowhere and is immediately hired as the nanny (and who bares a striking resemblance to a mannequin shown earlier in the film), a strange photograph of the house that may or may not contain clues to the former residents etc. etc. etc.  Whatever. The finale has the family, sans Bob, being slaughtered by the evil doctor zombie, who, and I'm not making this up, is wearing a suit and tie! A very well dressed zombie to be sure, dripping maggots and blood and attempting to kill off our hero, Bob.

House by the Cemetery is an obnoxiously tedious affair, chugging along at fits and starts. At any point the story begins to lose focus (which is every 3 minutes or so), Fulci throws in a gory death in hopes the audience won't pay any attention.
Now, I'm not averse to gore films in general; in fact, Dario Argento's Suspiria is one of the finest horror films ever made, and it's just as violent and bloody as some of Fulci's work. But Argento has some things Fulci lacks, namely talent and style. Watch Suspiria and House by the Cemetery back to back and you'll see exactly what I mean.

If you have absolutely nothing else to watch, give House by the Cemetery a try. Don't expect much and  you won't be disappointed.