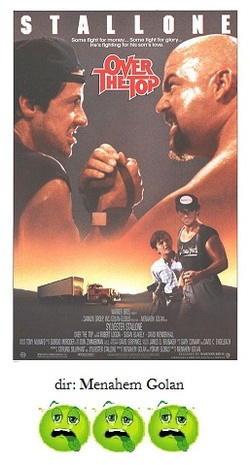 If you were wondering why Sylvester Stallone's critically acclaimed work in 1997's Cop Land was considered something of a career comeback, look no further than Over the Top from 1987.

Over the Top, a father/son bonding via arm-wrestling drama, was released near the beginning of what could charitably called Stallone's 'lean period'.  Beginning with 1986's Cobra, Stallone was involved in one dire project after another, squandering all of his box-office clout and good will.  He gave the world Lock Up, Tango & Cash, Oscar, Judge Dredd, Stop! or My Mom Will Shoot!, Assassins and others (Cliffhanger being the sole bright spot).  Over the Top may not be the worst of these, but it certainly is the oddest.

Stallone stars as a long-haul trucker who dreams of one day being the arm-wrestling champion of America.  Before he heads to Las Vegas for the competition, he first picks up his long-estranged son from military school to spend some 'quality time' on the road getting to know one another.  The first thing we in the audience know is that this kid (smarmily played by David Mendenhall) is an annoying brat.  At one point, Mendenhall tries to flee from Stallone by rushing out into oncoming interstate traffic and we pray that one of those drivers will fail to swerve.

To complicate matters, Robert Loggia is on hand as the cliched evil, rich grandpa who does all he can to keep Mendenhall away from Stallone, even though this father/son road trip was the last wish of the kid's dying mother!  We have many scenes between Stallone and Mendenhall which, I'm sure, are meant to be heart-rending (with such deep dialogue dealing with 'finding what you want and taking it!') but are enough to spike blood glucose levels on just about anybody.

And then there is this whole business of the arm-wrestling.  If there is a less cinematic or stimulating 'sport' in which to base a movie around, I don't know what it might be...Curling, maybe?  Each match only lasts about 3 seconds, except for when director Golan decides to use slow-motion as a way to generate non-existent tension.  It all really boils down to watching a large group of sweaty muscleheads holding hands, only with more bulging eyes, popping veins and roars of pain and exertion.  Most laughably of all is the fact that each of these competitors outweighs Stallone by about 100 pounds and have arm muscles that are bigger than his head, and yet, he is the big champion.  It would be something akin to watching a movie where Tom Cruise wins a Strongman competition.

Unlike some of Stallone's other turkeys, Over the Top isn't nearly as painful an experience, and needless to say, there weren't any other studios trying to cash in on arm-wrestling with copycat movies.  This one was a big enough dud on its own to have to be responsible for a whole subgenre.