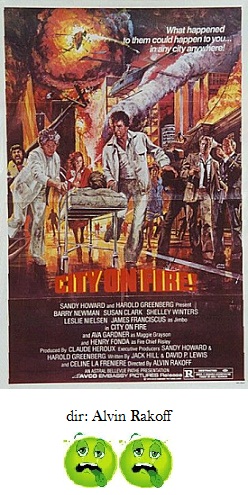 This largely forgotten entry into the disaster movie sweepstakes of the 1970s really could've been sued for false advertising.  Instead of a City on Fire, we get what could more accurately be called City Block on Fire or maybe Hospital on Fire, but those titles just don't have the same ring to them.

The set-up is thus: corrupt Mayor Leslie Nielsen is about to have the showy unveiling of a brand new hospital, but Doctor Barry Newman is concerned about the hospital's shoddy construction and wiring.  Now, in this particular city, there is a massive oil and chemical refinery that is, unwisely, smack dab in the middle.  Jonathan Welsh, an employee at the plant, is fired, so in retaliation, he walks around the refinery opening random valves which not only begin to cause massive explosions, but also dumps fuel into the city's sewerage system.  We'll just say that, not only is security lax at this particular plant, but the ease at which such utter destruction can happen is more than a little disconcerting.  Anyway, the fuel in the sewerage system ignites and we get a....City on Fire!

Yes, we hear about how badly the city is being engulfed in flames, we just don't really get to see it.  Sure, there are a couple of scenes of characters standing on the edges of cliffs looking down at the city which is surrounded by poor lighting and special effects, but to say these moments lack impact is an understatement.  For the bulk of the movie, we are stuck at the hospital as Newman, Nielsen, nurse Shelley Winters and volunteering Welsh who seems oblvious to the fact that he was the cause of all this, empty out the rooms and wings, wheeling out patients onto the city streets surrounded by ablaze buildings.  Not only do they have to worry about the fire, smoke and dangerous debris, but we are told, ad nauseum, about how the fire is going to suck out all of the oxygen and suffocate them all.  And as most of these movies go, some characters survive, others not so much.  The best moment comes when Winters and a patient she's helping down the street get crushed by falling, burning debris.

City on Fire was released at the tail-end of the disaster genre's popularity and it promptly and solidly bombed.  People were just tired of all of the burning buildings, capsized ocean liners, crashing aircraft, meteors, hurricanes and avalanches, and the craze was officially dead by 1980.  They're fun enough for what they are, it's just that they just aren't much of anything to begin with.