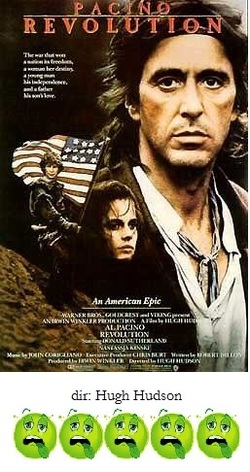 As history lesson, Revolution serves a great purpose. Don't get me wrong, for a film that depicts the American Revolution, there is little to no actual revolution going on. The lesson is one that director Hugh Hudson and stars Al Pacino, Nastassja Kinski and Donald Sutherland learned: Make an expensive, rotten film and watch your career spiral downward. Pacino, Kinski and Sutherland recovered. For Hudson....that's another story.

I thought, if nothing else, I'd get a useful lesson in history. Boy, was I wrong. Except for a sporadic battle or two within its 135 minutes of running time, there is nothing in the screenplay to give any indication of stategies, alliances or even an indication of who is winning. Revolution feels that the most important focus of this time in history is of a lackluster Gone With the Wind-esque romance.

The film opens with Al Pacino and his son on a boat. The hilariously bad and incomprehensible acting performance by Pacino is evident from frame one; it's as if he can't decide if he's from Colonial New England or modern day Brooklyn and slaughters every line in a half-accented mumble. Anyway, Pacino and son are railroaded into serving with the Colonial army against the British. Kinski, also trying (and failing) to enunciate clearly is the daughter of wealthy Irish Tories, who, gasp, defies her parents and sides with the Colonists. Sutherland is a British Officer, and he also attempts a British accent, but since he lowers his voice about 8 octaves in the process, everything he says also comes out garbled.

For the rest of the movie Pacino fights in one battle, Kinski shows up to help dress soldier's wounds, and Sutherland acts evil, at one point even beats Pacino's son, who has been forced to be a drummer boy, across the feet for no real reason. Richard O'Brien, from The Rocky Horror Picture Show is another prissy officer and he organizes a fox hunt, forcing Pacino and another man to drag a stuffed dummy across the terrain. After another daring escape, Pacino and son are taken in by some Indians, who spend about eight hours worth of screen time balming the boy's foot wounds while Pacino murmurs in his ear.

Eventually, the Colonists do win freedom, somehow. Everything is explained with exactly one line of dialogue from an off-camera extra: "The French have joined our cause, the war will be over in two weeks!" Pacino and the other veterans are bilked out of the compensation they were promised, and after Pacino is told to take his big mouth to the Congress, Pacino states "My mouth belongs exactly where I put it!" End of movie, time to wake up.

Director Hugh Hudson committed complete career suicide with this very expensive dog that made about $4 at the box office. This from the man who did Chariots of Fire and Greystoke, the directing offers have been extremely few and far between ever since. Hudson has only directed three films of note since this costly failure.

Revolution is probably the brownest movie in history. All of the costumes are of varying shades of beige and tan, the buildings are covered with soot and grime, every scene is filled with billowing clouds of smoke and dust, the sky is always overcast and it rains a lot. I guess the sun never shone on Colonial America.

This is one ungodly paced fiasco that goes nowhere (but not fast). Hollywood learned a pricey lesson: If you want to make a war movie, it might be a good idea to put a little war into it.